This week, instead of a review or an article, I’m going to talk a bit about the progress on my fiction works – both what’s going on right now, and where I’m hoping to go next. Currently I’d like to do a more informal progress update like this once per month (in addition to updating my projects page on an as-needed basis), but that will depend on how much work has been accomplished, and what all I’m willing or able to talk about.

A Valentine’s Day Horror Story: This short story idea hasn’t worked out as well as I had hoped, so I’m sorry to say that I’m shelving it, for now. I’ve got about 2,000 words written on it, but it’s like I’m dragging a two-ton weight when I try to write it. I really like the setting (so expect this odd little tale to return at some later date), but I erred in my character design. The main character/viewpoint character, Edmund, was meant to appear bland and uninteresting from the outside, but I ended up making him bland and uninteresting on the inside, too.

See how that might be a problem? He’s just not enjoyable to write. I think I can fix him, but it would take some time and research to accomplish, which I don’t really want to spend at this time. I think the story has potential, but it just isn’t flowing well enough, so I’m setting it aside. IT SHALL RETURN.

The Rule of Iron: Most of my work over the last month has been on Rule. I’ve read through my first draft (and have let a handful of other people take a look at it, as well), and am pleased to think that the storyline is decent. The book still needs a TON of work to be of publishable quality, but I’m excited to continue chipping away at it. I can’t deny that part of the motivation problem with the Valentine’s Day short story was that I was pretty eager to return to Rule.

I’ve completed a first pass over the book. This has included writing down the outline-as-written and jotting notes and a few small changes in the text as I went. My plan was to compare the outline-as-written to the outline-as-intended in order to seek out weaknesses in the story. I knew that my initial outline was weak (namely because I didn’t have an ending, and didn’t really have a way to lead into the climax), and so wasn’t surprised to find that I derailed a fair bit. To be honest, I think it’s a bit surprising that I was as close as I was.

My characters, however, were quite different. One of the characters I had marked as being fairly cowardly turned out to be quite courageous, perhaps even bloodthirsty (some of the intended and emergent themes of the book were masculinity, courage, and the correct use of violence). The changes which I noted in the characters weren’t necessarily bad, but they were occasionally surprising. I don’t think the organic development of the characters needs to be trimmed, and I like where they are.

The plot and pacing, though, definitely need some trimming and readjustment. That’s what I’m currently in the process of working on. I was working on figuring out a list of scenes I needed to splice into the book – mainly the first third – when I realized that it would be cleaner and more efficient to just rewrite that whole section. This is frustrating, but makes sense (and there are large portions which I can save). I did a lot of my worldbuilding by discovery, so the first half would require very, very extensive revising to make the world cohere across the novel. Working this way will be more efficient and less frustrating overall, but this revelation was still difficult to accept.

I’m currently outlining that large chunk of new and/or revised material. When I’m done writing it, I’m going to fit it into the first draft, and then do the same with other scenes and portions which I’ve noted on my list, followed by going through my scribbled-on manuscript and making the smaller line-level changes I had noted in passing. When all of THAT is done, I’ll have about a rough draft and a half.

My next step then is to go back through that 1.5 draft and smooth it out; this will basically entail doing a line edit myself, to make my writing smoother and stronger. This is going to take a really, really long time, I’m sure. I hope to have that done by May, but I won’t be surprised if doing the edit and then entering it takes me longer than that. This will finish my first draft, and leave me with a second draft.

After I finish the second draft, I intend to go hunting down beta readers among friends, family, and fellows in my writer’s group. I might do a few other editing passes before I give the book out to beta readers (turning dialogue into dialect, seeking out inconsistencies/anachronisms, and the like), but my current plan is to do those fine-tuning passes after getting feedback from a round of beta readers.

Figuring out a plan beyond the second draft and beta read probably doesn’t have much point since the plan itself will likely get changed and revised in the interim. However, after processing feedback from my beta readers and doing those fine-tuning edits I mentioned above, I think I will submit the book for professional editing (which shouldn’t be too expensive, I hope; I doubt that the book will exceed 80k words, keeping the cost in the few-hundreds. I hope.), and then begin the query process after those edits have been taken into account.

All told, my goal is to be querying for The Rule of Iron in about eight or nine months. While that’s definitely optimistic, I don’t think it’s entirely unreasonable. The biggest variables are how long it would take to get the book back from beta readers, and from a professional editor. Additionally, I would also consider sending the final book by other beta readers for a last pass over it before querying.

The Weekly Thing: I’ve taken to calling my weekly review or article “my weekly thing,” in my head and in passing conversation, and I like that name. It’s official-ish, now. So far, I’ve been quite consistent in writing this, and I’m proud of that. I’m still working out the kinks of how I like to write my reviews, but it’s still enjoyable and having to publish SOMETHING every week has helped me to keep honest in my work. I’ve recently decided to start trying to prioritize new fantasy fiction, and so far that has felt like a good move. After all, it’s both the genre I want to write in, and the genre I read the most in. I’m planning to review James Islington’s debut novel The Shadow of What Was Lost next week, and I’m really looking forward to it. I was pleasantly surprised by how much I fell in love with that story.

Research: I’ve not gotten much research on nonfiction projects I enjoy done lately, but I did finish some. Just recently I read Eric Cline’s 1177BC: The Year Civilization Collapsed, and found it interesting. I’ll probably review it in The Weekly Thing at some point (since it’s a fairly recent publication), but I still feel somewhat conflicted about writing reviews for nonfiction – especially reviews for somewhat narrow scholarship. While I’m definitely interested in the subject material of what I read, I’m not sure that others reading this blog would be. We’ll see. I do have a fiction idea in mind which has been fermenting as a result of my historical interests, but I’m going to leave it out of sight, for now.

Tales of the Shining Knights: I’ve taken to calling the storyworld or potential series of The Rule of Iron the “Land of the Shining Knights.” I like the world, and the magic, and I think that I’m not going to leave it alone with just one story. It may only get one book, but I’ve got ideas for at least two short stories or novellas, one of which I’m sure I’m going to make an attempt at writing someday. I suspect that I’m going to get sick of editing Rule at some point, and I think that these stories are what I’m going to end up working on. They’re both backstory to Rule, but don’t make sense as a part of the full narrative.

Anyway, that’s a long-form summary of where I’m currently at in my fiction work (and an update on personal research, as well). Progress is inevitably slow, but I’m pleased to say that I think it is steady. 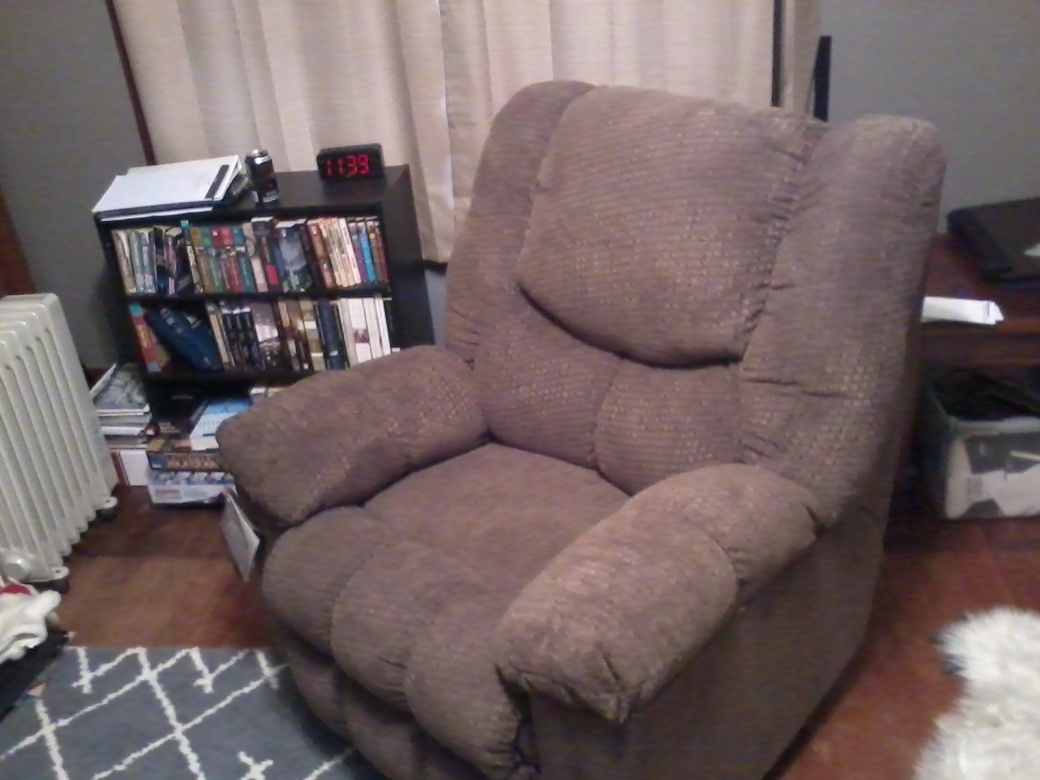 And with that, I’m going to leave you all jealous of furniture. If you’ve got questions or comments, feel free to leave them below, or message me over on Facebook or Twitter. I’ll try to get back to you as quick as I’m able. Social media’s also a good way to see when I’ve posted a new Weekly Thing!

One thought on “Fiction Updates!”

Austin is a 2015 graduate of Gustavus Adolphus College who reads a lot and occasionally writes something. He still lives in Southern Minnesota, where he works with youth and makes plans for world domination with his cat, Mr. Bigglesworth.